Home / LD-Reconstruction
Write your question or ask for a callback.

LD-flap is used for the reconstruction of small breasts of very slim patients lacking excess fat and skin on their abdomen. For this reason, the flap of skin, fatty tissue and necessary muscle piece for the formation of a new breast are transplanted from the back. It leaves a horizontal scar on the back which will usually remain invisible below the bra. If needed, LD-flap can be taken from both sides of the back for bilateral breast reconstruction.

Blood flows into this so-called LD-flap through the axillary blood vessels. The entire flap is detached so that only the blood vessels and the nerve stay connected with the armpit; then the flap is turned over onto the chest and given the shape of the patient’s own breast. It is also possible to suture extra nerves with the flap, and try to gain better sensation for this new breast.

Photo: LD-reconstruction in left breast. It has been made during cancer operation and the own breast skin has been saved. A nipple has been built later with a small local flap and tatuation. No implant needed.

Photo: LD-reconstruction result, a nipple will be reconstructed later.

If the patient wants bigger breasts, the size of the breast can be corrected by adding an implant underneath the LD-flap. 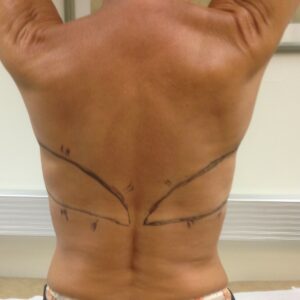