Home / Helena Puonti
Write your question or ask for a callback.

Since 2001 Doctor Helena Puonti has been developing a unique microneurovascular technology which restores sensitivity as the reconstructed breast recovers. She has shown that it is possible to recover natural sensitivity in the breast skin when even just one (or two) nerves of skin-muscular tissue from the abdominal cavity anterior wall is sewed to the sensitive nerve fibre of the breast.

This innovative technology was published in her thesis in 2017. Many patients come to Clinic Helena for breast reconstructive surgery not only for breast shape, but also to recover breast sensitivity.

This is my story

I was a little girl when I realised, I wanted to become a doctor. 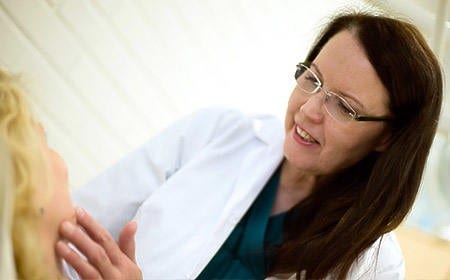 My mother suffered from painful osteoarthritis which might have contributed to my decision as I wished I could have been able to ease her suffering. My choice of high school was then based on my big dream and afterwards, I continued to study medicine.

During a surgery course in medical school, I realised that taking care of the cuts and bruises was the “traditional doctor” work which I had always wanted to do.

In the beginning, being a surgeon felt like too big a challenge, but I regained trust in myself as I realised that the main goal in every surgery was to heal the patient, not just to complete a technically perfect operation.

Each patient deserves to have the right diagnosis and the most suitable treatment plan of all the available care methods.

A good surgeon needs not only excellent craftsmanship but also the ability to listen and understand the patient alongside knowledge and experience.

This is something I have understood along my learning journey from many skilful teachers.

I started working as a surgeon in Pietarsaari on the western coast of Finland, first as a resident and then as a senior physician.

I specialized in surgery in Kokkola City Hospital and Tampere University Hospital. After graduation, I moved to Savonlinna for family reasons.

I started micro chirurgy in 1991, became a plastic surgeon in 1998 and in 2001 I reconstructed the first sensitive breast for a breast cancer patient by introducing nerve coaptation to the free flap technique.

I did my PhD thesis on the subject in 2017. My research included close to 100 patients to whom I reconstructed a breast using microneurovascular muscle sparing TRAM flap.

According to my research, the recovered sensitivity (touch, hot and cold, pain) has, on average, been 60% of normal breast sensitivity – although the research has also included breasts that have even regained full sensitivity.

In addition to the Savonlinna Central Hospital work I founded Clinic Helena in 1999 and it has given me a way to develop the aesthetic surgery side of the practice.

Aesthetic plastic surgery is an extremely challenging field as there are no standard procedures; you need to identify the core issue and understand the needs and wants of each patient individually.

In aesthetic surgery most of the expertise needs to be acquired abroad. The first operating years were quite stressful but with time the constantly amounting knowledge and experience have given me the courage and wisdom to trust in my own abilities in executing even the more difficult operations. 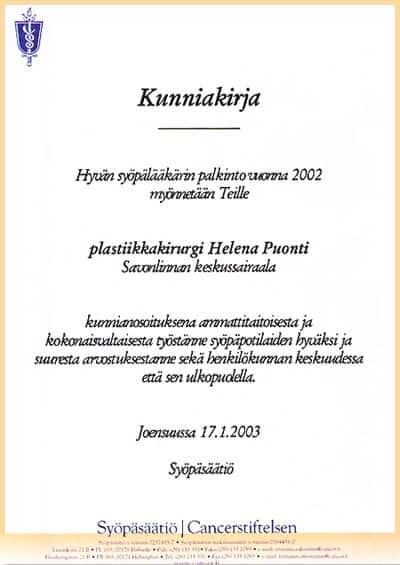 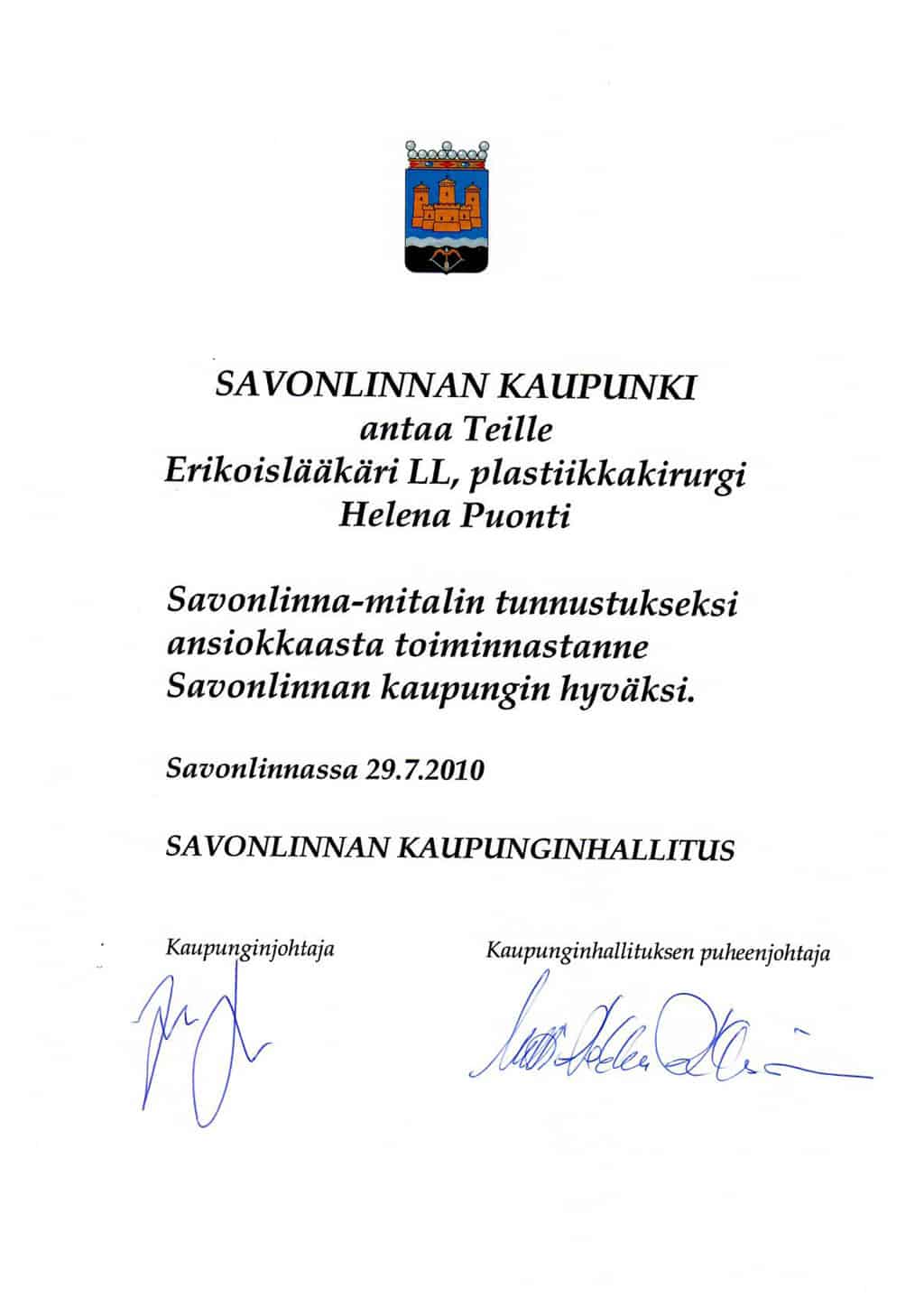 In the past, black sheep were grown in the Olavinlinna castle for the St. Olaf festivity dinner. According to the legend, one night the sheep saved the whole castle when it rose to the stonewall and scared the enemy away with its big horns and the scary sound of its claws rattling on the stonewall, hence it became the “local hero”. 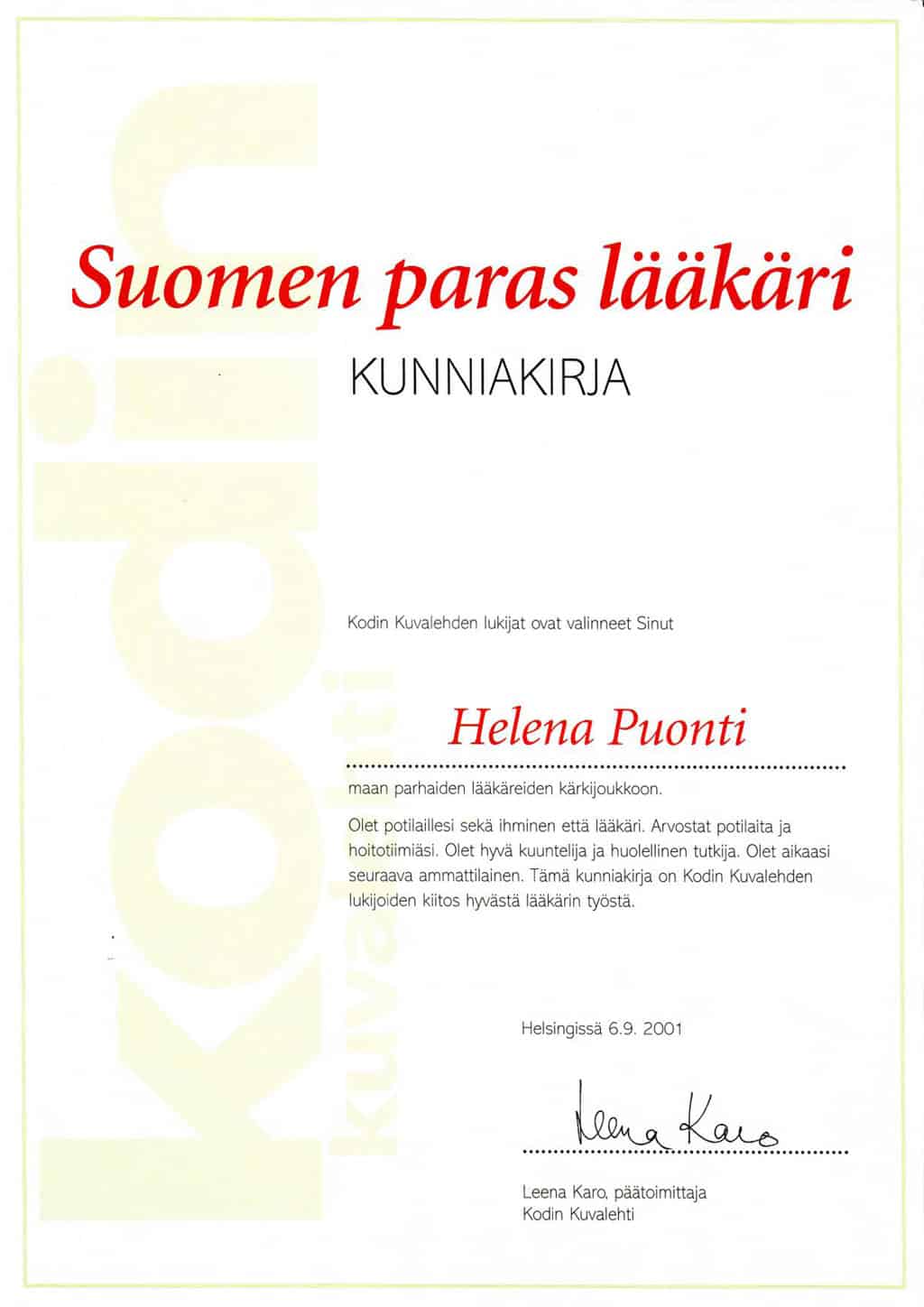 “Kodin kuvalehti” journal- 2001
The readers of Kodin Kuvalehti chose Helena as the “Best Doctor in Finland” claiming that Helena is “to her patients both a human being and a doctor. She appreciates her patients and her medical team, she is a good listener and a meticulous researcher, a professional who keeps up with the latest research”. 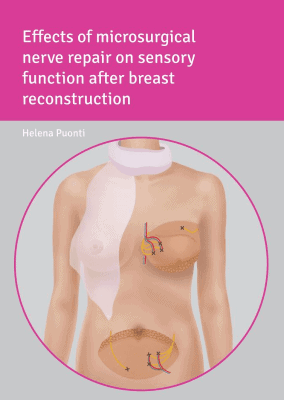 A beautiful, naturally-shaped and symmetrical breast mound will be created for a breast cancer patient after mastectomy using a free abdominal flap. The disadvantage with the breast reconstructed with this method is its lack of sensation, even some spontaneous reinnervation takes place from the surrounding tissues.

The objective of the present study was to find and develop a method of dissecting and reconnecting nerves of the abdominal flap and the chest area in order to reconstruct a breast with sensation for the breast cancer patient. The first aim was to find out, which nerves in the chest and the flap, when coapted, would provide the best sensation to the reconstructed breast. The second aim was to investigate whether the dissecting of the nerves causes additional complications in the abdominal flap donor site. The third aim was to develop a better neurorrhaphy technique, using two nerve pedicles. The fourth aim was to assess and qualify the methods of sensory assessment employed in the study.

Breast reconstruction with a free muscle-sparing transverse rectus abdominis myocutaneous flap (ms-TRAM flap) was performed in this study for 96 breast cancer patients in Savonlinna Central Hospital between 2001 and 2013. The reinnervation of the flap was performed in 44 patients with the novel dual neurorrhaphy technique and in 32 with single neurorrhaphy, and 20 breast reconstruction patients without flap reinnervation functioned as a control group. The contralateral healthy breasts of 38 breast reconstruction patients were used as the reference site, and 20 healthy volunteer women participated sensory testing of healthy abdominal skin. Skin sensation of the reconstructed breast was assessed two years after the surgery. In addition, between 2006 and 2013, sensory testing of the skin of the mastectomized breast was performed prospectively before the reconstruction surgery, and the healthy breast, abdominal skin and the reconstructed breast skin were also tested one year after the surgery. Sensory tests included clinical sensory examinations, quantitative sensory tests (QST), skin samples, and neurophysiological somatosensory evoked potentials (SEP). Additionally, a patient questionnaire of patients subjective sensory changes was carried out.

Both neurorrhaphy techniques provided the reconstructed breast with better skin sensation than without neurorrhaphy, and dual neurorrhaphy resulted in better sensory recovery than innervation with single neurorrhaphy. All available tactile nerves in the chest area proved to be capable of restoring sensation to the ms-TRAM flap breast. No significant complications occurred in the abdominal wall in the flap donor site with either of the neurorrhaphy techniques. Nerve coaptations did not cause pain symptoms, and the increase in the operative time was insignificant.
The function of large myelinated sensory fibres (i.e. vibration and tactile detection) recovered best. The poorest recovery took place in small unmyelinated sensory fibres (i.e. thermal detection and sharp-blunt discrimination). As a result of breast cancer treatment, tactile and thermal sensitivity of the mastectomized skin was reduced already before breast reconstruction surgery.
All methods of sensory assessment employed in the study could detect the nerve damage caused by the surgery and measure nerve regeneration, with the exception of epithelial nerve fibre density (ENFD) testing, which could not identify nerve regeneration in the comparison of innervated and non-innervated breast reconstructions. Additionally objective SEP proved to be quite an insensitive method in diagnosing nerve damage, they might be suitable for follow-up of its recovery. QST and the clinical sharp-blunt discrimination test were the most sensitive tests both for the identification of sensory damage and nerve regeneration.

Based on this study, we recommend dual neurorrhaphy of the ms-TRAM flap in breast reconstruction for use in clinical practice.